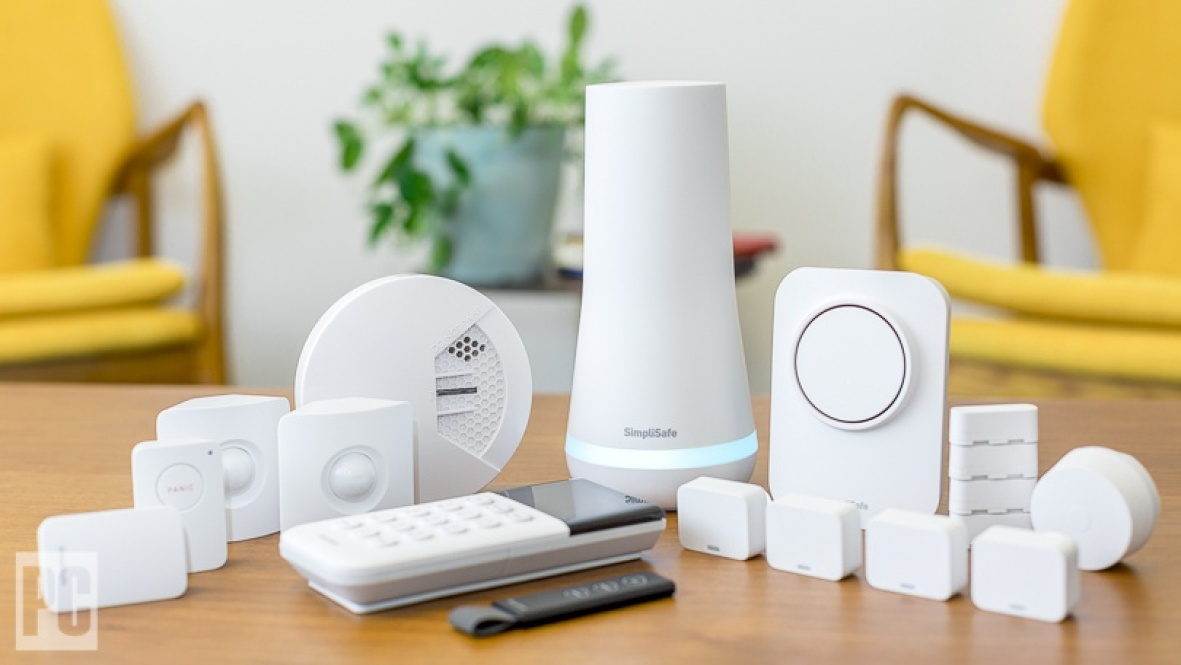 Simplisafe is a comprehensive home protection system designed to alert you in case of unusual happenings around your home. It comprises a smoke detector, a motion sensor, an entry sensor, a panic button, a loud 105DB siren, temperature and a water sensor.

Simplisafe is a wireless home security system configured to keep you and your family safe it, therefore, offers 24/7 monitoring. And the best thing about the system is that anytime your home is invaded the police are notified by the installation company. The unit has also been intelligently designed to detect intruders and not pets, in the event of a disaster the signals are reliably sent from the sensor to the base station and back. And since the system fully depends on electricity, in case of a power outage, the backup battery kicks in and will ensure that the security system remains operational for up to 24hours.

Simplisafe is a wireless home security system made of various individual units that work together to safeguard your home. The whole system comprises of 11 pieces all with different functions and you also get a free HD camera. The first important unit of the system is the wireless Base station that just needs to be plugged into a wall receptacle, no tools are needed for installation.

The second unit is the wireless keypad which can be placed anywhere, preferably on your front door. We then have the entry sensor which is used to guard entry in the front and back door, and the two easy-to-access first-floor windows. The security system package also comes with a motion sensor installed in the two main rooms and will always alert you in case of intrusion in either of the rooms.

Another important unit is the siren boasting of up to 105 decibels and which is extremely loud, its function is to scare away intruders while also alerting your neighbors. The system also comprises of a panic button, which is preferably placed beside your bed, so that you can easily press on it when the sirens go off in the middle of the night. You also get a temperature sensor that is placed closed to the thermostat, the information from this unit is sent directly to the command center and you will be notified if the temperatures drop below 40˚.

The water sensor will also send a notification in case there is a leak or flooding from your water heater or washing machine. The package also contains a smoke detector that will have the firefighters sent to your home from the command center.

Burglar Alarm- among the primary features of a home security system are the burglar alarms, Simplisafe wireless home security system has incorporated a 105DB siren that will not only scare away the intruders but also alert your neighbors. Homeowners will also benefit from the entry sensor which is used to guard both the front and back door. The sensors will go offer in case of intrusion and even better is that the home alert system can differentiate between pets and human intrusion thus minimizes the chances of sounding false alarms.

Simplisafe is equipped with a reliable backup and will remain efficient even when you don’t have power. The unit comes equipped with batteries that begin working as soon as your home experiences a power outage, the only concern with the battery backup is that homeowners don’t get alerts when the battery is low.

Note that SimpliSafe is a system and not a single unit like a smart lock, thus it might require installation, but the good news is that you will not need any tools for installation. Some of the wireless units in the systems only need to be attached to a wall receptacle while others only need a convenient placement to perform their jobs. In essence, is that it is a DIY security system.

Simplisafe is a reliable home security system that will protect your valuables from disasters, and this goes for fire outbreaks, floods, and intrusion from burglars. The unit has been designed to send a notification to the command center indicating the problem and the command center will dispatch appropriate help to your location. Be it the police or the firefighters, asset protection is all round.

Who is it best suited for?

Simplisafe Wireless Home Security System is best suited for use by homeowners, given that it has been designed to offer protection to all areas of your home, cover all types of disasters and detect intrusions.

Are there alternatives to the Simplisafe Wireless Home Security System?

Verdict: So should you buy the Simplisafe Wireless Home Security System?

Yes, you should buy the Simplisafe home security system, because it is efficient, simple to set up, and will offer 24/7 comprehensive security.

Do I have to pay a premium to use the Simplisafe Wireless Home Security System?

Do I need the internet to use the Simplisafe Wireless Home Security System?

Yes, the camera and the communications unit work best with WiFi.

Disclaimer: Rated Gadgets is a participant in the Amazon Services LLC Associates Program, an affiliate advertising program designed to provide a means for sites to earn advertising fees by advertising and linking to Amazon.com. We also participates in various other affiliate programs, and we sometimes get a commission through purchases made through our links.

Robinson Wright is a home automation specialist and has helped many modern home developers pick the right gadgets for home automation. According to Wright, most people struggle with particular areas in their home, some would want improved security especially when away from home for a couple of days and others will want to improve power consumption. Homeowner's needs can be fulfilled by investing in smart home gadgets but most importantly is that one must know the functionality that they desire to achieve and then choose a product and technology that would fulfill the need. Robinson Wright runs an appliance enterprise and when not in the field working with his clients, he loves spending time in his workshop testing out the new technologies.

RatedGadgets is a blog reviewing devices used in home automation. We seek to bring our users the most up to date, accurate reviews of products which we test ourselves. Products are ranked according to their cost-performance ratio, and in-depth buying guides help our users decide what to purchase.